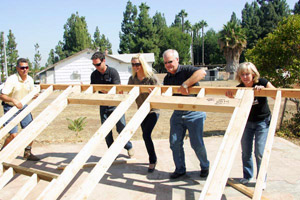 “Chandra and I are blown away,” said Johnson. “We are still working on the final numbers but we have definitely exceeded our fundraising goal.”

A dinner and live auction were held the previous evening and raised more than $200,000. J Records recording artist Gavin DeGraw also performed at the dinner, held at The Prado at Balboa Park. Some of the items up for bid at the live auction included a Jeff Gordon fire suit and Johnson’s race worn helmet, both receiving winning bids of more than $20,000.

“The dinner was awesome,” said Johnson. “Chani and our staff did a great job creating a nice setting and Gavin really added to the evening. I couldn’t believe some of the bidding that was going on.”

The Johnsons kicked off the week with a visit to Granite Hills High School. It was Johnson’s first visit to the school since his graduation in 1993. The El Cajon native drove a specially painted version of his No. 48 Lowe’s Monte Carlo SS around the football field and did doughnuts in the end zone in front of a packed stadium. Afterward he was inducted into the Granite Hills High School Athletic Hall of Fame.

“I couldn’t resist throwing up a little dust and rocks in the end zone,” said Johnson. “I told the kids they could take the rest of the day off but unfortunately I didn’t have enough pull to make that happen for them.”

Johnson also visited with faculty, and with his sponsor Lowe’s, donated more than $15,000 worth of merchandise including a new grill, Kobalt tools and tool boxes.

The events concluded on Thursday as the Johnsons, Robert Niblock, Chairman and CEO of Lowe’s, and Cheryl Keenan, Executive Director of San Diego Habitat for Humanity, ceremoniously raised the wall of the Habitat for Humanity home that will be built using funds from the golf tournament.

The site is located in El Cajon and the Johnsons hope that the amount raised through the week’s events will fund construction of at least two homes on the site.

“We’ll have to wait and see, but it looks like we will be able to do much more for the community than we originally thought,” said Johnson. “It was an incredible week, and all I can say to everyone who helped us is- thank you.”