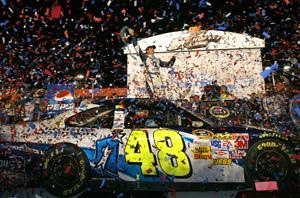 “We set the bar pretty high last year and I wasn’t sure if we would be able to match it this time around,” said Johnson, a native of El Cajon, Calif. “Once again our friends and the San Diego community stepped up. The money we raised will definitely complete the four houses we are building with Habitat and hopefully allow us to do even more in the San Diego area.”

A dinner and live auction were held the previous evening and raised more than $150,000. Lachey also performed at the dinner, held at The Prado at Balboa Park. Some of the items for bid included an exclusive Garth Brooks concert experience and autographed hat and guitar, private lessons with Motocross Champion Rick Johnson and a custom Jimmie Johnson Foundation/Sunoco Warrior by Star Motorcycle.

Johnson’s Helmet of Hope, which he will wear during Sunday’s Sprint Cup event at Auto Club Speedway, sold for $18,000.

“Helmets are pretty special to me and I very rarely part with them,” said Johnson, who will also compete in the Nationwide Series race this weekend. “This one was pretty special to a lot of people with all the charities represented on it. I just hope we can take it to victory lane this weekend for them as well as the winning bidder.”

The Johnsons started the week with a special key-passing ceremony on newly-named Foundation Lane, the recently formed road on which four homes are being built by San Diego Habitat for Humanity with proceeds from the Jimmie Johnson Foundation.

The first owner, El Cajon-resident Carol McDaniel, was on site with her daughters Natasha, 14 and Vanessa, 11, and son Isaiah, 13, to officially become the first residents.

“Being an El Cajon resident, I wanted to raise my children here but didn’t think it would ever be possible to be a homeowner in Southern California, “said McDaniel, who works for the city’s police department. “The Jimmie Johnson Foundation and San Diego Habitat for Humanity have given me the opportunity to own my home and provide a safe place to raise my children.”

“The kids keep telling everyone they can’t wait to have their first barbecue. They even asked Jimmie to come,” added McDaniel.

Construction is underway on Foundation Lane’s three remaining homes and is scheduled to be complete by October 2009.

“This has truly been a remarkable week for San Diego Habitat for Humanity,” said Elizabeth Neubrand, Director of Development and Community Affairs for San Diego Habitat. “We are extremely grateful to the Johnsons for their commitment to complete the four-home project. Their efforts have resulted in four families from Jimmie’s hometown having a place to call home for many years to come.”

To cap off the week, Johnson dominated the field in the Pepsi 500 Sprint Cup race at Auto Club Speedway and drove the No. 48 Lowe’s/Jimmie Johnson Foundation Impala SS to victory lane.