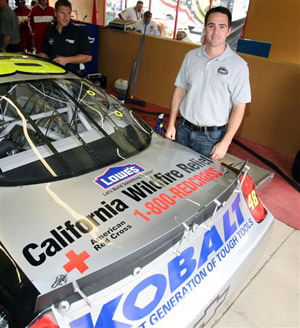 Johnson, through the Jimmie Johnson Foundation, and Hendrick Motorsports will donate their winnings from Sunday’s NASCAR Nextel Cup race at Atlanta Motor Speedway to assist Red Cross relief efforts throughout Southern California. Lowe’s and Smith will each match those contributions dollar for dollar.

The Red Cross is providing people affected by the fires, including residents, firefighters and first responders, with shelter, food, water, clean up and comfort kits, and medical and mental health services. The California wildfires have burned almost half a million acres and forced the evacuation of over a million residents. The wildfire relief effort is especially important to the 32-year-old, El Cajon, Calif. native. Johnson, who has personally witnessed the devastation wildfires can cause, rallied Lowe’s and Hendrick Motorsports to join forces in the relief effort.

“I can remember a couple of times as a kid growing up and being evacuated out of the area. The most recent big fire that went through there (El Cajon) took down the neighborhood where I grew up. Somehow, the home I grew up in was still standing but homes surrounding it were burned down. This hits pretty close to home,” said Johnson who is a member of the American Red Cross National Celebrity Cabinet.

Johnson and wife Chandra spent time in the El Cajon area in August with their foundation, hosting a celebrity golf tournament and charity events that raised over $500,000 for construction of new Habitat for Humanity Homes.

“It’s sad. People lose their homes in these fires. They lose everything they own, everything they worked for,” Johnson said. “This donation is our way of trying to make someone’s life just a little bit easier. I hope NASCAR fans can help out the people as well.”

Jimmie Johnson’s Kearny Mesa Chevrolet also will serve as a donation site. Gifts may also be made through the Jimmie Johnson Foundation at JimmieJohnsonFoundation.org.

“We have employees who have been directly affected by this tragedy,” said Rick Hendrick, also the chairman of Hendrick Automotive Group, which operates 10 auto dealerships in California. “It doesn’t look like any of our folks will lose their homes, so we’re lucky. Not everyone is so fortunate.
“It’s vital that we raise awareness, and having a guy like Jimmie leading the charge is a great shot in the arm. I’m proud of what he and Lowe’s are doing, and our prayers continue to be with the people of Southern California.”

In addition to matching the donations by Johnson and Hendrick Motorsports, Lowe’s declared each of its 85 Lowe’s stores in California as official Red Cross cash donation sites. Lowe’s will match all of the donations it collects at the stores up to $50,000 to support Red Cross relief efforts for the California wildfires.

“Home and family are an individual’s most important assets, and Lowe’s is dedicated to providing assistance to our California neighbors as they rebuild their lives,” said Larry Stone, chairman of the Lowe’s Charitable and Educational Foundation. “The Lowe’s customer donation program will help the American Red Cross in providing essential support to the devastated communities.”

Smith, whose philanthropy includes distribution of millions of dollars through Speedway Children’s Charities each year, praised Johnson’s effort and is reaching out to others in the NASCAR community to join the effort.

“Personally this hits close to home,” said Smith. “I spend a lot of time in California. In addition to my vacation home in California, I have 72 dealerships there that employ thousands. These fires have a far-reaching and devastating effect. So many families need help short-term and long-term in rebuilding their homes and re-establishing a normal quality of life. I am recruiting others in the NASCAR community this weekend to join this effort as well.”

This weekend, Johnson’s No. 48 Chevrolet will sport a Kobalt Tools paint scheme as well as a special 1-800-RED CROSS decal on its decklid (trunk) for fans to call for information or donate to the Red Cross’s wildfire relief efforts.

Johnson, seeking to repeat as the series champion, trails Jeff Gordon by 53 points with four races remaining in the 2007 “Chase for the Nextel Cup.” Johnson’s seven victories, including the latest at Martinsville on Sunday, are the most of any driver in 2007.