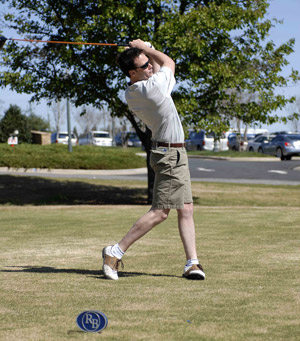 EL CAJON, CALIF. – Winning races, a championship and racing side-by-side with other NASCAR Nextel Cup drivers at more than 200 mph each weekend in front of hundreds of thousands of fans and millions of television viewers are just some of the things that excite Jimmie Johnson. So does returning to his hometown of El Cajon, Calif.The days leading up to the Sept. 1 and 2 NASCAR races at California Speedway should prove especially exciting for the 2006 Nextel Cup champion and his wife Chandra who plan to host their first charity golf tournament, visit Jimmie’s old high school and watch Jimmie race special paint schemes in both the Busch Series and Nextel Cup races at the Fontana, Calif. track.”It’s hard to put into words how much this week will mean to Chandra and me,” said Johnson, whose 27 career victories in just six full-time seasons places him 22nd on NASCAR’s all-time victory list.

“San Diego is the place where I grew up and I feel a lot of my success comes from the values I learned and support I’ve had from the people there. Sure, it is going to be rewarding but it’s also going to be a lot of fun.”

Highlighting the week’s activities away from the track is the Johnsons’ first major fundraising event, The Jimmie Johnson Foundation Inaugural Golf Tournament Presented by Lowe’s, in San Diego on Wednesday, Aug. 29.More than 200 golfers are scheduled to attend the sold-out tournament along with several celebrities, including NASCAR drivers Bobby Labonte, Brian Vickers, Juan Pablo Montoya and Kyle Petty.”When Chandra and I were talking about starting the foundation we knew one of the things we wanted to do was to give back to the areas where we grew up,” said Jimmie who created the Jimmie Johnson Foundation with Chandra in February 2006 to help children, families and communities in need throughout the United States.The foundation committed funds for a four-lane bowling alley at the Victory Junction camp in Randleman, N.C. and participated in Make-A-Wish programs and other fundraising efforts. But the Johnsons said they are especially excited about a project in Jimmie’s hometown.”It is truly a humbling thing for me to see how the San Diego area has stepped up to show its support of what we are trying to do through our foundation,” said Jimmie.Money raised at the golf tournament will help build a San Diego Habitat for Humanity house in El Cajon.”San Diego Habitat for Humanity is tremendously excited for our partnership with the Jimmie Johnson Foundation,” said Cheryl Keenan, the organization’s executive director. “The Foundation’s mission of bettering communities and the lives of children perfectly parallels our mission. We look forward to Jimmie taking a break from driving his racecar to driving nails on our home.”

In addition to the tournament, a private dinner and live auction will be held Tuesday evening. The event will feature celebrity entertainment and auction items, including: a race worn Jimmie Johnson helmet, a Jeff Gordon fire suit, a VIP trip for two to the 2008 ESPY’s and the chance to meet skateboarding legend Tony Hawk.

“Jimmie and I really wanted to make this dinner something special because it provides an event for people who may not play golf but who still want to be a part of what we are doing in San Diego. I am so impressed and grateful to the people who graciously donated items for our auction. I think we will be able to raise even more than we expected for the community.” said Chandra, a native of Muskogee, Oklahoma and co-founder of the Jimmie Johnson Foundation.

Prior to the dinner Tuesday, Jimmie will visit with students from his high school alma mater Granite Hills High School and join Lowe’s in making a donation to the school. The former Granite Hills Eagle, who will drive his specially painted No. 48 Lowe’s Chevrolet Monte Carlo SS onto the track at Granite Hills Stadium, also will be inducted in the school’s Hall of Fame.

“I can’t wait to see the place again,” Johnson said. “It doesn’t seem that long ago that I was roaming the halls. It will be interesting to see if some of my old teachers are around and I’m looking forward to visiting with the students.”

School Principal Georgette Torres said the students are excited about seeing one of Granite Hills most famous alumni.”Jimmie has so many fans in El Cajon and especially here at Granite Hills High School,” said Georgette Torres principal of Granite Hills High School. “I know the students and faculty are going to get a kick out of seeing him drive into the stadium in his racecar. He is a most worthy addition to the Granite Hills Athletic Hall of Fame.”It will be back to work for the Hendrick Motorsports driver once he drives through the California Speedway tunnel Thursday night and practice begins Friday for Saturday’s Busch race and Sunday’s Nextel Cup race. The weekend marks Johnson’s second Busch series race in 2007. He will race a Kobalt Tools paint scheme during the Saturday race. On Sunday, Johnson’s No. 48 Lowe’s Monte Carlo will carry a special Jimmie Johnson Foundation/Habitat for Humanity paint scheme in the 500-mile race.”We want to raise awareness for Habitat for Humanity and the foundation,” said Johnson. “There will be lots of fans there and the race is nationally televised. We hope this might introduce fans to these charity organizations and create some interest. Lowe’s was gracious enough to let us run this paint scheme on the Nextel Cup car so I really want to thank them for their support not only for this race but the entire week of events.”

Johnson knows it will be a busy week on and off the track.”I am so excited for everything from visiting my old high school, to the golf tournament to seeing old friends,” said Johnson. “It’s a busy week but I know it’s going to be a gratifying one for Chani and me. Nothing could be better than to end it with a win at California Speedway. It’s where I got my first Nextel Cup race win and hopefully my next one as well.”