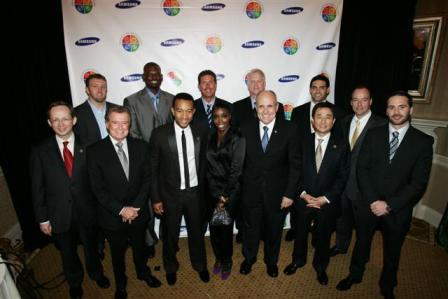 Grammy-Award winner and philanthropist John Legend gave a special live performance to more than 500 guests in attendance where his “Show Me Campaign” was one of the benefiting charities from the evening’s event. The Show Me Campaign’s mission is to end poverty through sustainable development, education and service at the individual, family and community levels.  Legend also brought along singer songwriter Estelle and his brother Vaughn to help entertain the crowd as both are part of Legend’s new record label, Home School Records.

“Samsung’s Four Seasons of Hope is proud to begin its eight year on such a positive note by raising nearly million dollars for the program’s charities and providing an amazing performance by John Legend who is also a true philanthropist,” said CS Choi, president and CEO, Samsung Electronics America, Inc. “It is especially exciting and encouraging to see all of our partners and celebrities coming together to benefit children and families. Even during this difficult economic climate, Samsung looks forward to being able to support these charitable efforts as we continue our corporate philanthropy initiatives.”

–  Arnold Palmer Hospital for Children & Women. Located in Orlando, FL, the hospital offers comprehensive healthcare services for children and women as well as nationally acclaimed specialty programs including the Congenital Heart Institute, Neonatal Intensive Care Unit, the third largest Labor & Delivery department in the nation and the region’s only Level I trauma center.

–  Boomer Esiason Foundation to Benefit Cystic Fibrosis. Created by Boomer Esiason and his wife in 1993 after their son was diagnosed with cystic fibrosis, the foundation works to raise money to find a cure for the genetic disease. To date, more than $50 million has been raised for the cause.

–  Jimmie Johnson Foundation. Launched in 2006 with his wife Chandra, the Foundation is dedicated to assisting children, families and communities in need.  In 2007, the couple opened Jimmie Johnson’s Victory Lanes, a four lane bowling center for children with chronic and life-threatening illnesses at Victory Junction in Randleman, N.C.

–  The Joe Torre Safe at Home Foundation. Created in 2002 to bring educational programs into schools and develop community awareness surrounding the issue of domestic violence.

The Show Me Campaign operates from a basic principle of thoughtful action versus more words and calls on all of us to commit to making a difference in the world. We see power in individuals working in concert toward tangible ends and believe that we all have responsibilities to address the issues that imperil our collective human future