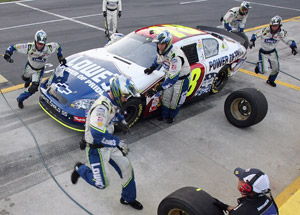 CHARLOTTE, N.C. — Lowe’s, Hendrick Motorsports and the Jimmie Johnson Foundation have announced a special online auction of the No. 48 team’s actual pit crew uniforms. Proceeds from the auction will benefit the Benny Parsons Museum.

Crew chief Chad Knaus, along with the team’s seven over-the-wall pit crew members, said they agreed to donate the uniforms worn in NASCAR Nextel Cup races as a mark of respect for the late Parsons.

“Benny was always a big supporter of the crew members in the garage,” said Knaus. “This is something the guys wanted to do. They came up with the idea of auctioning off their crew uniforms. Believe me, those uniforms are very special to the guys and not something that we normally make available, but Benny was a special person who meant a lot to this sport. I think this gesture by the guys proves that, and we hope it helps with the building of his museum.”

Parsons died Jan. 16 from complications resulting from treatments for lung cancer. His wife, Terri, is currently raising funds for a museum in his honor at Rendezvous Ridge near North Wilkesboro, N.C. For more information on Benny Parsons, visit BennyParsons.com.