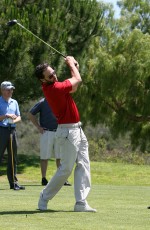 “This is an incredible event,” said Johnson, who grew up in El Cajon, Calif.  “I love coming back to southern California and being able to connect with our sponsors, partners and friends, while raising money to fund incredible school projects.”

The tournament, which in six years has raised more than $3 million, focuses on the Champions Grants program, a partnership between the Jimmie Johnson Foundation and Lowe’s Toolbox for Education. The grants range from $25,000-$100,000 and are distributed to K-12 educational programs in Chandra and Jimmie Johnson’s hometowns in Oklahoma and California, and where they currently reside in North Carolina.